It’s the “cutting season” — and that’s just as terrifying as it sounds.

The practice of female genital mutilation, also known as female genital cutting or FGM, is defined by the World Health Organization as any procedure that intentionally alters or causes injury to the female genital organs for non-medical reasons — and summer is when the practice thrives.

Young girls are out of school, giving them more time to heal before the next school session. It’s a time of year many young girls in Africa and the Middle East, where FGM is most prevalent, dread.

Though female genital mutilation is illegal in many countries, including the U.S. and the UK, some girls are sent to their countries of origin during summer vacation to be cut in what’s known as “vacation cutting.”

In 2012, the UN General Assembly adopted a resolution to eliminate female genital mutilation by increasing education on the harms of the practice, strengthening health care support and increasing advocacy in highly impacted areas. While it’s largely condemned around the world, social and cultural pressures to participate keep FGM a dark reality for many women.

According to social work professionals, fear of being excluded from the community and the need to preserve family reputation keep the practice alive. In many countries, it is also seen as a right of passage for women, culturally religious and a sign of sexual purity.

But FGM as a cultural practice is outweighed by the fact that it’s an undebatable human rights violation. There are no medical benefits to the procedure. In fact, it’s extremely dangerous — problems resulting from FGM can include trouble menstruating, problems giving birth and lack of pleasure during sex. Above all, there is a risk of death due to infection, a common problem because of unsanitary conditions.

Become more informed about FGM by reading the seven facts below.

1. Between 100 million and 140 million women and girls alive today have been subjected to female genital mutilation.

This range is so large because exact numbers are hard to track. Shame and cultural attitudes often silence those who have suffered from one of the four types of this gendered violence.

The estimated range is about four times the female population of the United Kingdom.

2. Most girls are cut between infancy and 15 years of age.

The average age of a girl who undergoes FGM is 10 years old. Many argue these extremely young girls are too young to be able to consent to the practice. And, even if a young girl does consent, many advocates working to stop FGM claim they are radically misinformed, voiding any sort of agreement.

3. The practice is most common in Africa and the Middle East.

There are 29 countries in which FGM is most concentrated. Most are located in Africa, while three of the countries are in the Middle East.

More than 90% of women and girls who have been cut live in just the top five countries where the practice is most prevalent.

4. FGM is moving toward being medicalized.

More than 18% of all FGM is performed by health care providers. In Egypt, more than 70% of female genital mutilation procedures are performed by doctors.

Though procedures may be more sterile when performed by medical professionals, this also puts the practice in danger of evolving to be viewed as medically necessary — and encourages disparities in medical ethics globally.

5. In the countries where FGM is most prevalent, most women think it should end.

Studies also show many women allow their daughters to be cut, even though they don’t necessarily agree with the practice, due to social and cultural pressure.

6. But, in some countries, more men than women think FGM should stop. 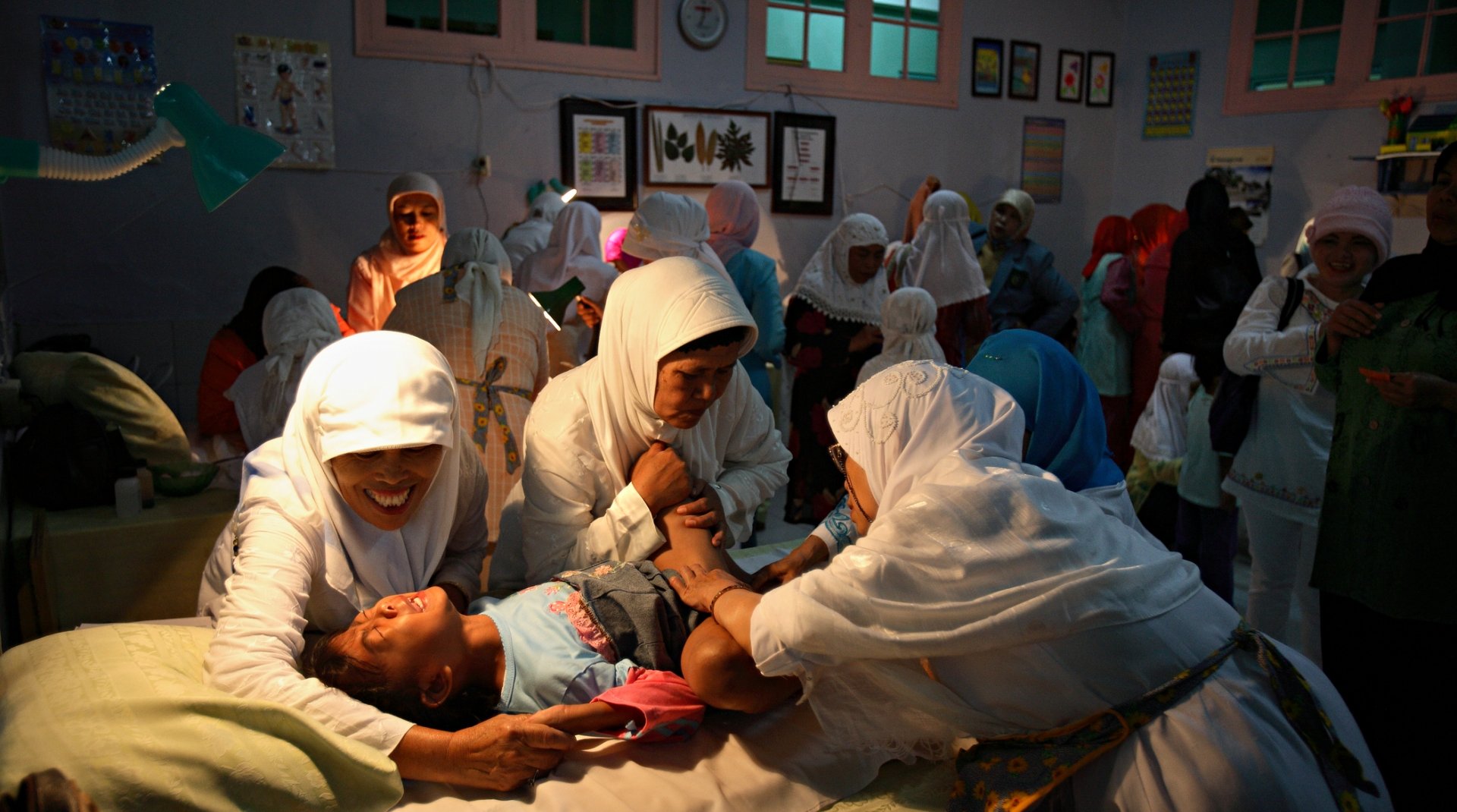 Though the practice is illegal in the U.S., trends like “vacation cutting” and the perceived cultural importance of the act keeps it a threat to women. This estimation, released earlier this year, shocked many — the number names three times as many women in the U.S. at risk than previously thought.